Zabludow occupies a special place in the hearts of the Jewish community worldwide. It is a feeling of great sadness and by the same token great pride that Zabludow invokes in all those who care to remember all of the events that have unfolded in this small Polish town. The story is one of death and survival, but mostly of faith, history and human resilience. The Jewish community of Zabludow has suffered immensely and sadly today, no members of the Jewish community live in this town of 2’400 residents. The once powerful Jewish community suffered at the hands of the Nazis and only four people are said to have survived the holocaust. Nevertheless, Zabludow continues to occupy an important place in the heart of Jewish history and culture.

The town is located on the banks of the Meletina River in the Bialystok Province of Poland. Records show earliest settlers arrived in this beautiful part of the world nearly 500 years ago. The history tells a story of economic vibrancy, resilient and powerful Jewish presence and a strong will to survive and endure through the harshness of life. It also emphasizes the depth of despair, war atrocities inflict and how thankfully many Zabludow Jews managed to flee and survive and now can be found in America, Israel, Mexico, Canada, Argentina and other places around the world.

The people have survived and though there are no Jews in Zabludow today, the town will always be a stronghold of Jewish faith, a symbol of survival and resilience and Jews worldwide will always harbor pride in their hearts and fondly remember the town. 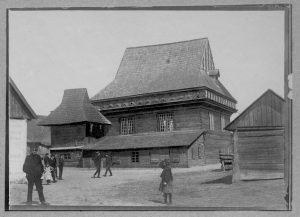 It is essential to preserve the history of Zabludow, to tell the stories of greatness destroyed at the hands of the hateful Nazi regime, to speak of the unspeakable barbarity of the holocaust, to honor those who were slaughtered and celebrate the survival of others.

Equally, it is imperative to treasure and celebrate the rich Jewish history of the town, tell stories of the once vibrant community and to foster the resilience of its people, those who sadly lost their lives and those whose are still alive today.

The Jewish community is greatly dispersed throughout the world and yet Jewish culture and identity are thriving and the Jewish people value their heritage and treasure their history.

Places like Zabludow contribute and are at the heart of Jewish identity and remembering historic events and cherishing times of great abundance gone by further strengthens the resilient Jewish spirit.

It is incredible to think that despite unbearable suffering visited upon the Jewish community worldwide, the community has survived to tell the tale and continues to grow culturally, spiritually, economically and socially.

Surely, in the greater context of Jewish history, the story of Zabludow is consequently one of unimaginable strength and resilience and a lesson learnt in survival and the recovery from great tragedy. The Jewish faith is the fuel of this unbelievably strong spirit and it is through their faith, the members of the Jewish community survived the past and are thriving today.